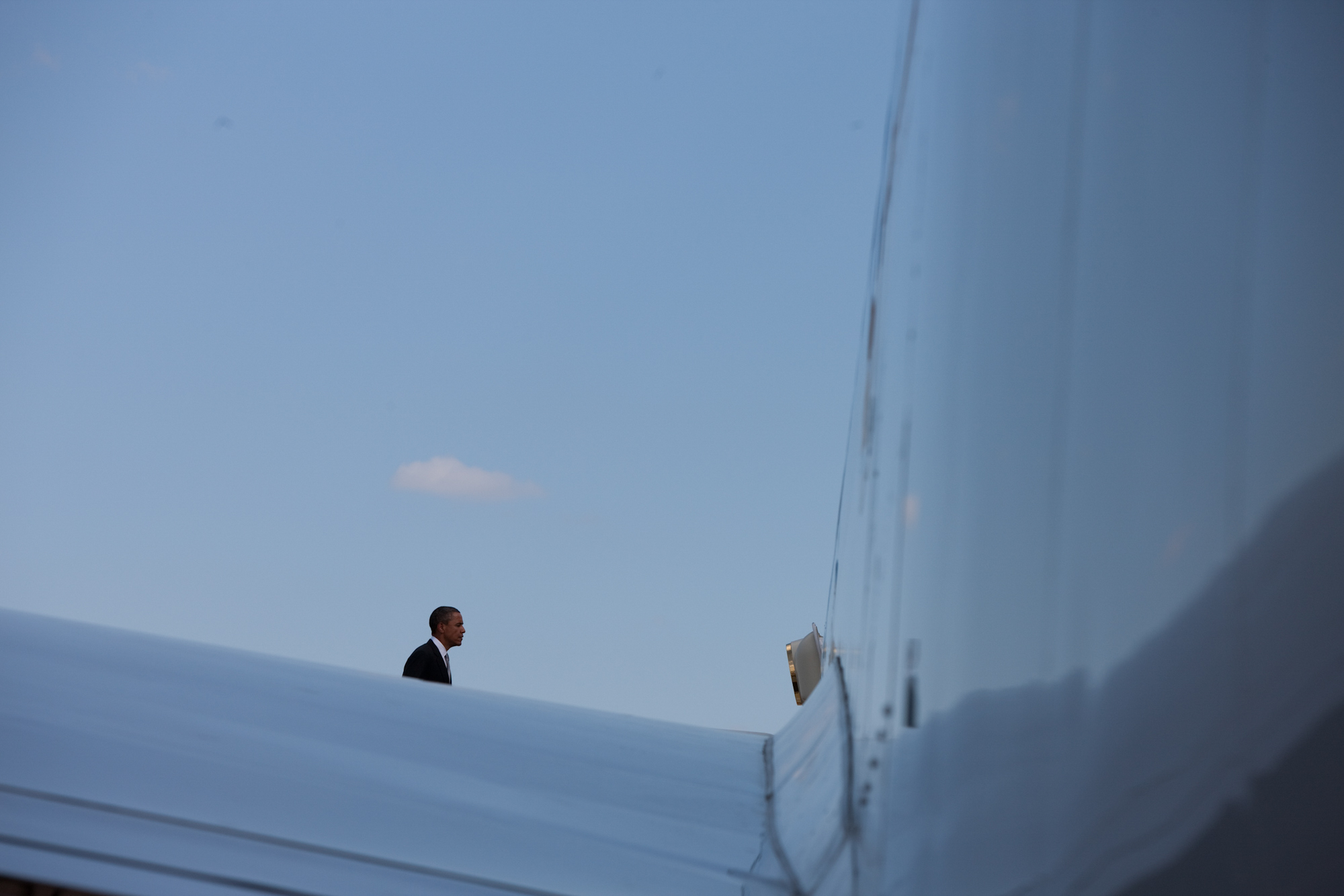 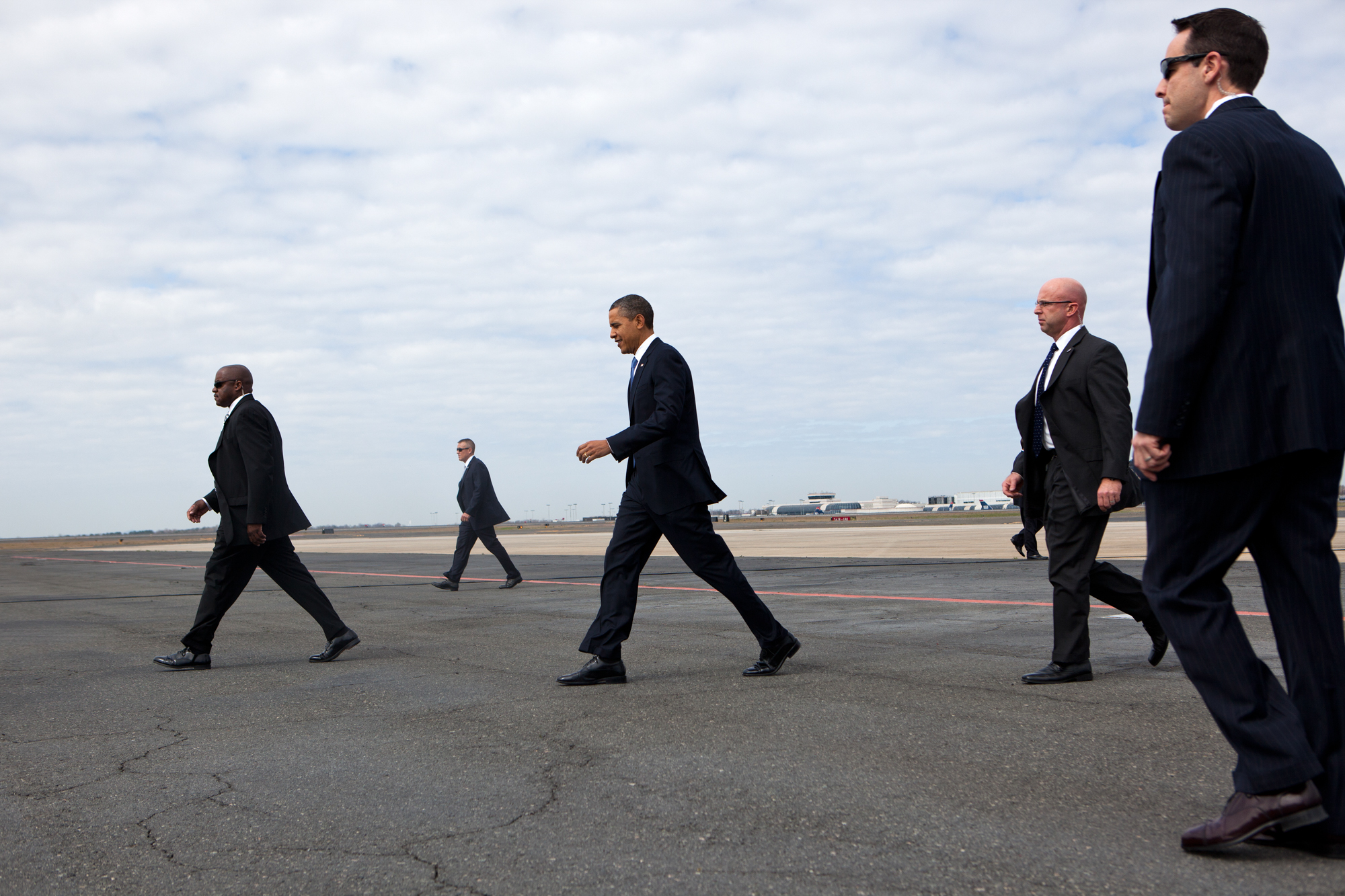 In 2008 I was working for the Associated Press as a staff photojournalist covering Capitol Hill, the White House and D.C.’s major professional sports teams. Working for the AP was a dream job that I truly loved. On election night 2008 I was assigned to the White House as the world awaited the election results between Senators John McCain and Barack Obama. When the election was called for Sen. Obama, I, like much of the country, was overwhelmed by emotion. I raced outside to take pictures in Lafayette Park where a jubilant crowd people celebrated with infectious energy I’d never experienced before.

At 1:00 am, after filing my pictures, I left the White House and headed to my car. The usually vacant streets were still very much alive. As I walked there was another man, another black man, heading in the same direction as me. We looked at each other with big smiles on our faces. He said, “Can you believe it?” “I know,” I said with the same sense of disbelief. It was at that moment I decided I wanted to be a part of history by working for the first African-American President of the United States.

I will keep this blog updated with pictures of current work, stories that are sometimes relevant (strong emphasis on ‘sometimes’) and reflections on lessons learned. Working for the Obama Administration was the job of a lifetime because I got to work with talented people dedicated to the mission of public service. 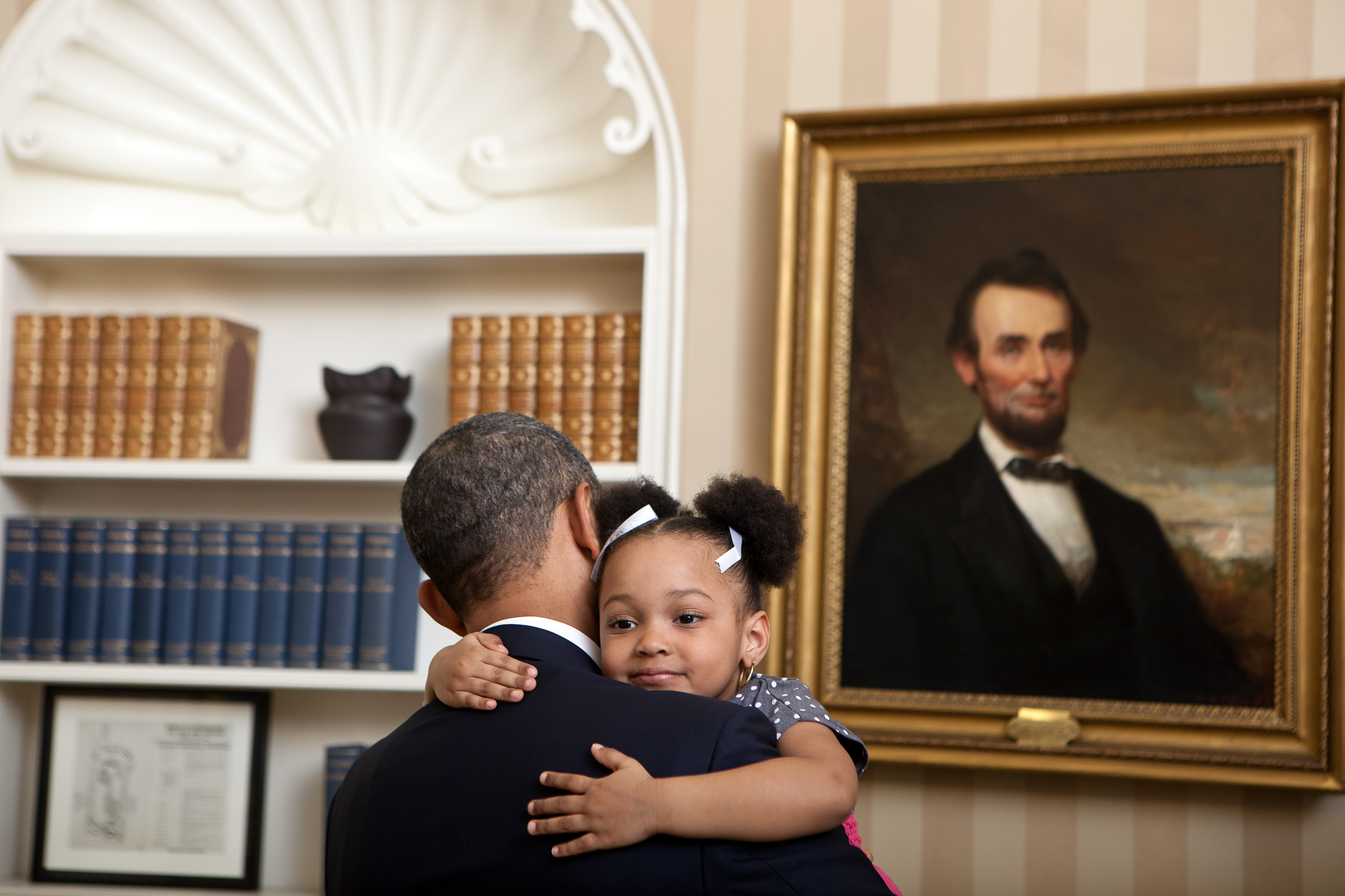 One of my favorite pictures taken during the Obama Administration. On the surface it's the President hugging the daughter of a White House staffer before their departure photo in the Oval Office. But reading more into the photo I see a little girl, who seems to be wise beyond her years saying "Thank you. Thank you for what you've done and continue to do on behalf of us all." I know it's grandiose and pie in the sky type stuff but it's what I see. 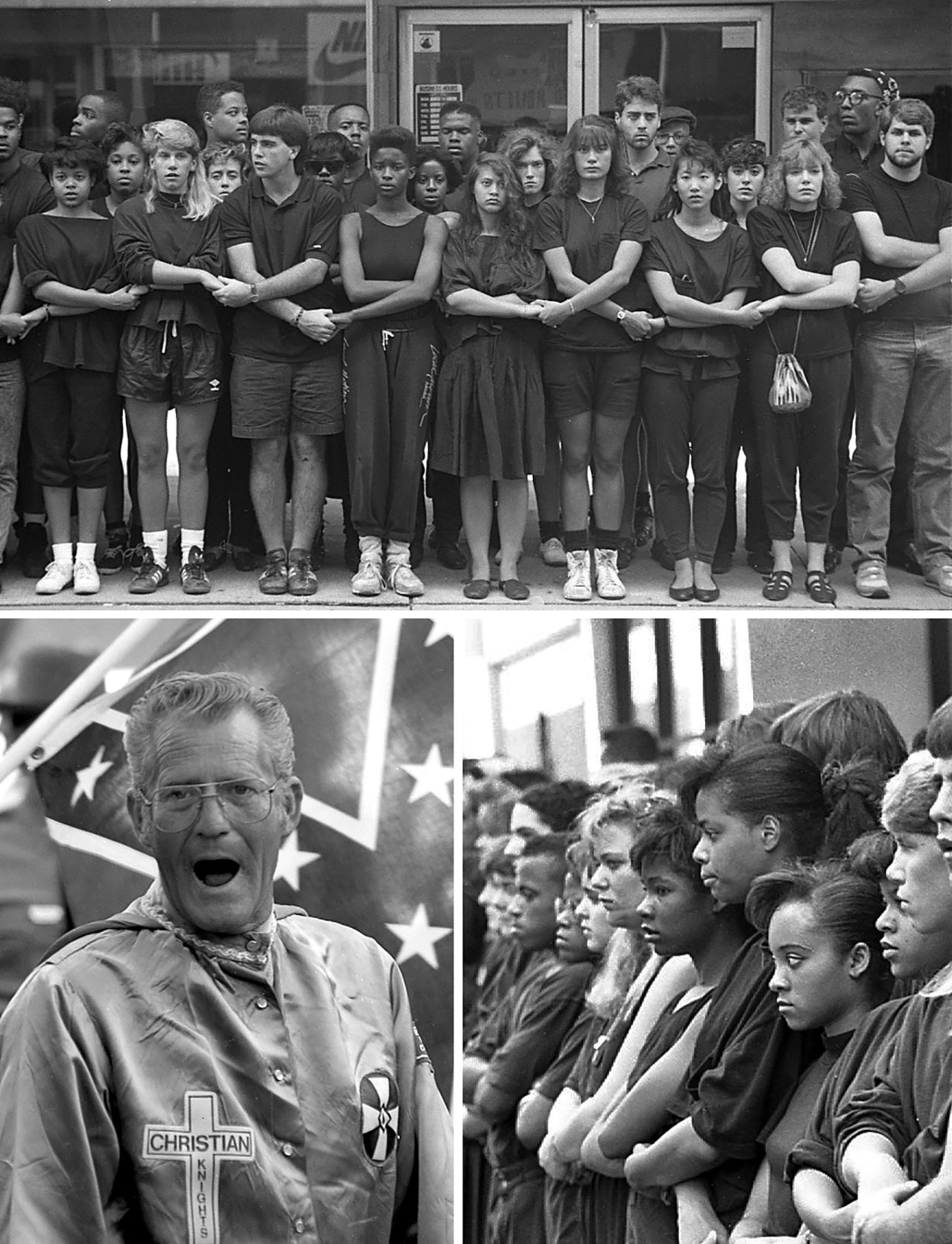 I was working as a student staff photographer for The Breeze, James Madison University’s student-run campus newspaper. I went down to cover the 100 or so JMU students who were participating in a counter protest to a Klu Klux Klan march in downtown Staunton, Va. The students, a mix of all races, genders and backgrounds, wore all black clothing, crossed arms, locked hands and stood in silence as the KKK marchers marched by chanting, among other things... “What do you want in America? White rights!”

After the 15 or so KKK marchers had passed some of the students burst into tears and just started hugging the person next to them. It was my senior year at JMU and I was 13 days from turning 21. I felt that I was becoming a man- someone who could stand up for myself and be accountable for all my actions- good or bad. But being around the these Klan members gave me a great sense of fear and unease that maybe I wasn't ready for the world. The real world.  So when I saw the deadly protests in Charlottesville it made me wonder if things had gotten worse since we elected the first African-American president. But then the stoic in me came forth and reminded me that things have always been "this" way. And the digital devices around the world has only brought it to the forefront of our digital lives. There’s not much more I can add to the discussion since the Charlottesville deadly and violent protests but I will say this….

• Keep the cameras rolling. Through smart phones, police body cams and old fashioned digital cameras people are being held accountable for their actions. These atrocities have been going on forever. It’s only in the light of digital capture that there are more and more people “seeing” these heinous acts for the first time and beginning to question things. Stay woke.

• To paraphrase Martin Luther King, Jr. - Through struggle comes growth. The struggle our country is in right now is it’s best opportunity to grow beyond the norms of the past and make things better. Or at the very least acknowledge things as they are and how they've been. My wife and I have two kids (11 and 13) and it worries us to no end the things they will have to face and how it will affect them. 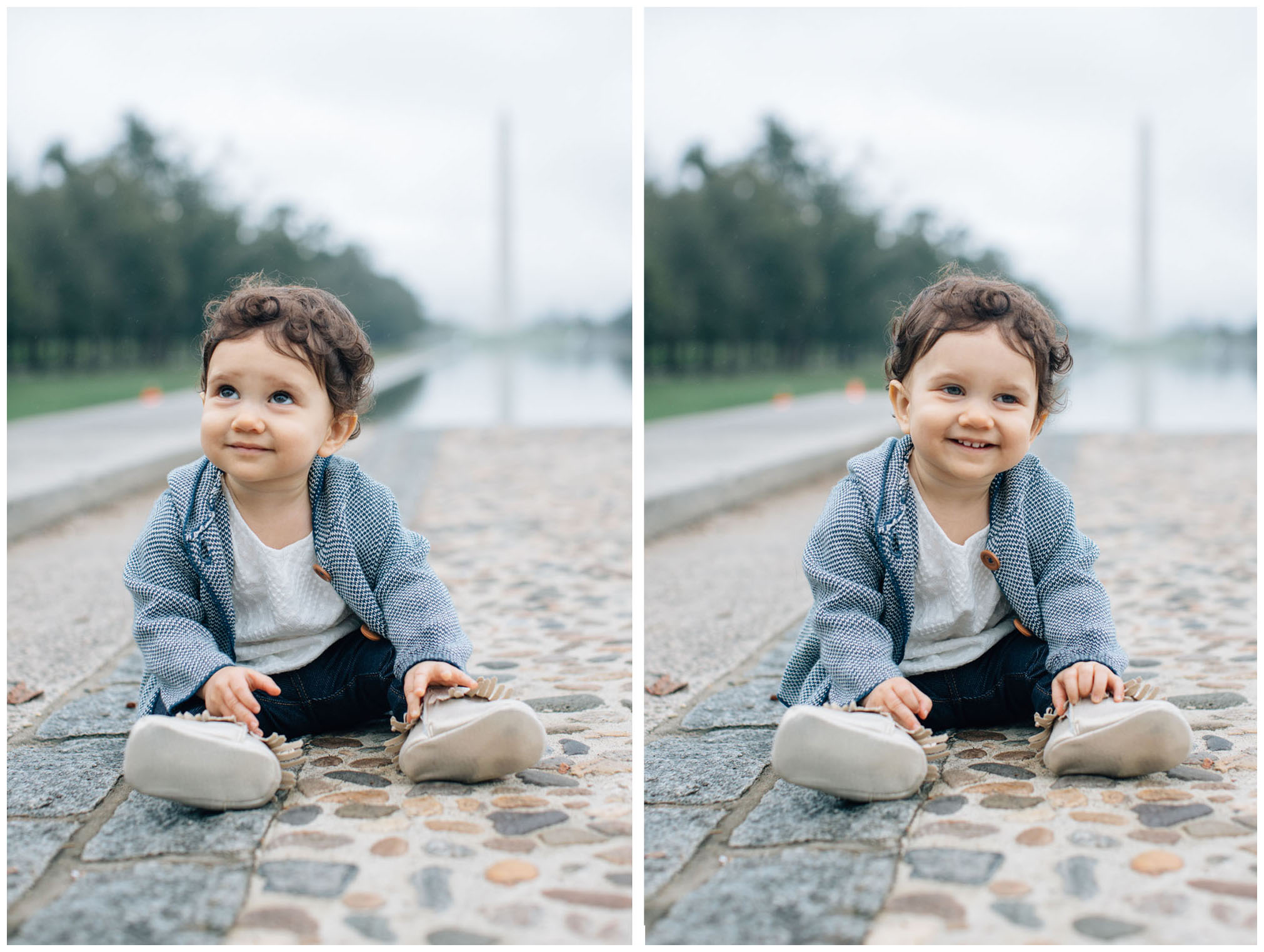 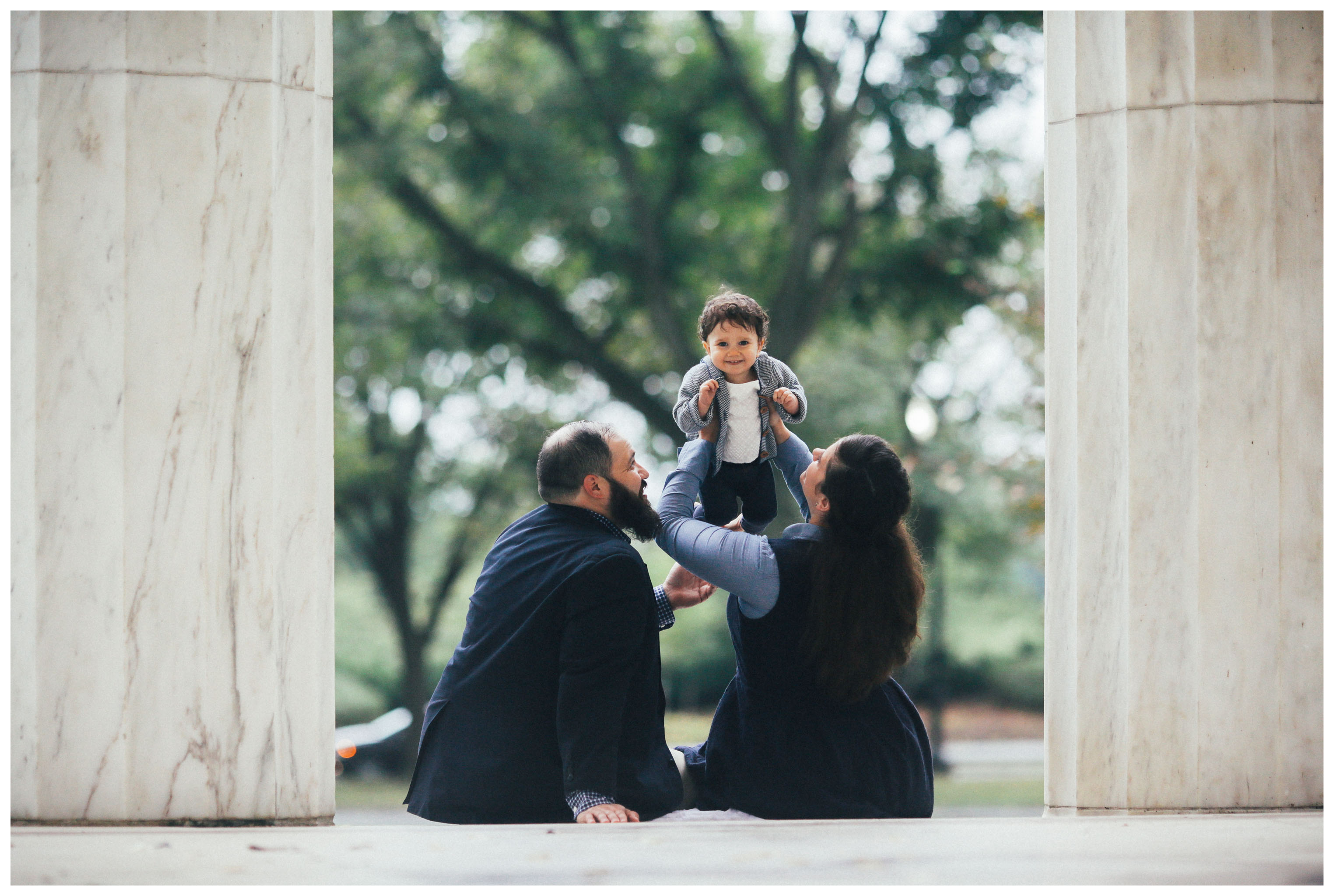 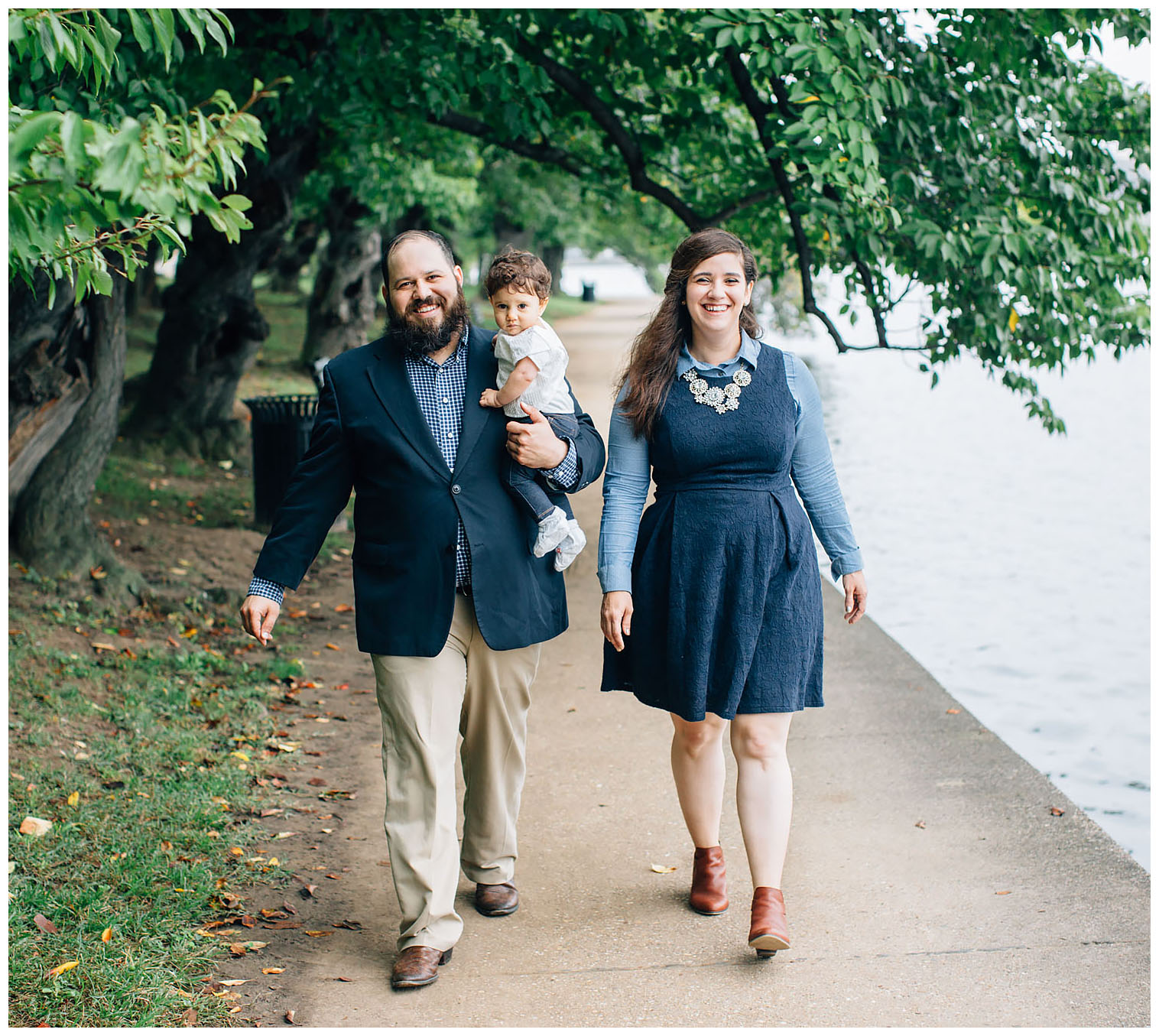 The Benhalim Family (Ana, Basheer and Ruqaya) and I decided to meet at the Lincoln Memorial at 8 am on Sunday. I got there a little early to scout the area and found eight other portrait sessions going on around the memorial. The weather was overcast and a bit misty but sometimes even and flat light can be a nice alternative to harsh the sunlight. We found our way to a more secluded spot on the mall and had our fun. Ruqaya could not have been a more helpful and willing subject. Not quite a year old she's got a poker face that will keep people guessing for years to come. But when she smiles all bets are off! 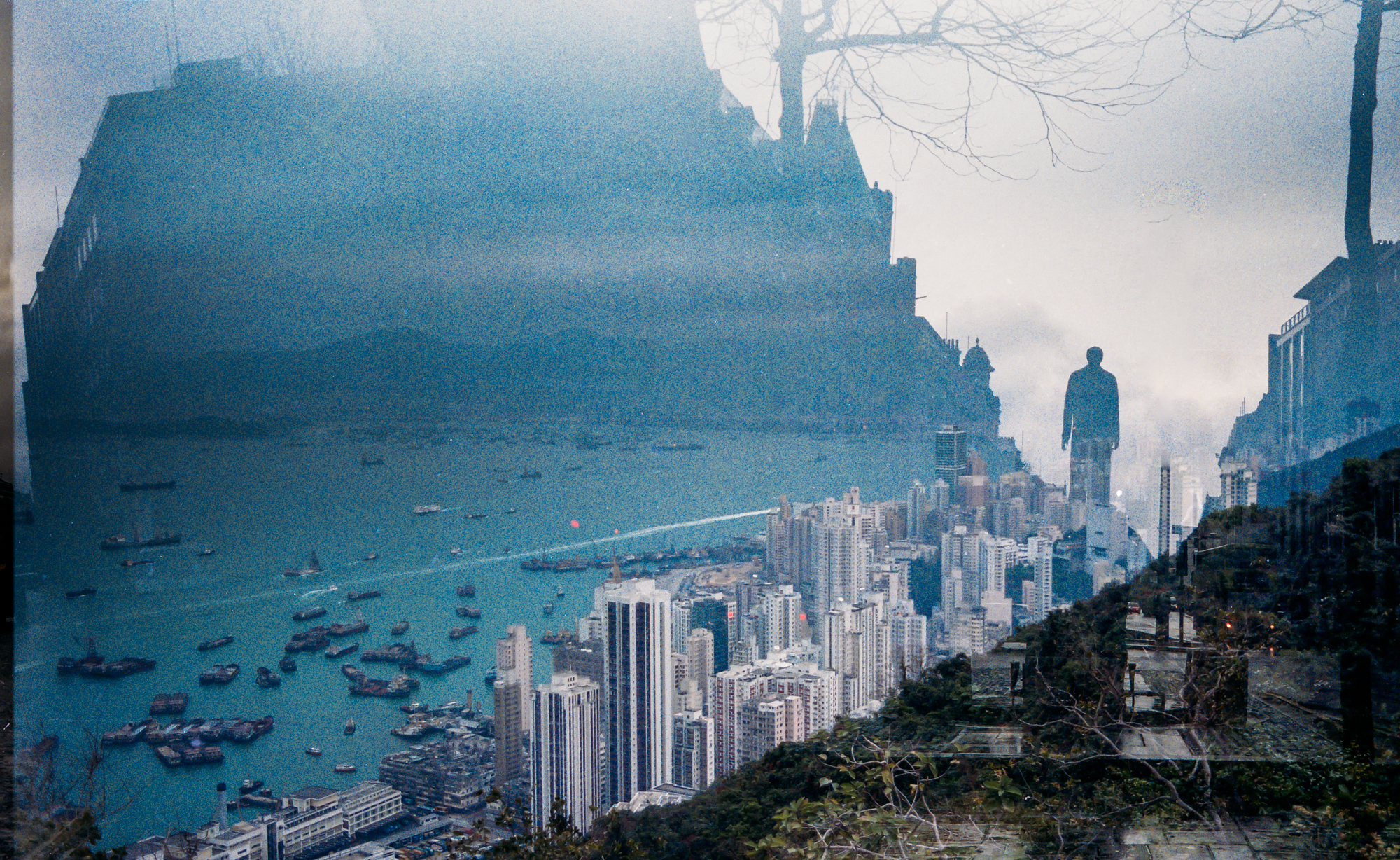 A double exposure of the Hong Kong city skyline and downtown Dublin Ireland, 1996.

A long time ago….

.... I had the opportunity to travel around the world. I was 27 years old working as a staff photographer for The Virginian-Pilot. I signed up for a Rotary Club program where a local club sends it’s members and representatives to another country for a month. It was an exchange program where people from different cultures could interact with each other. Since I’d signed up for month off from work I decided to make a four month leave of absence to do some extended travel. After a month in Japan I then went on to Australia, Singapore, Hong Kong, Thailand, Frankfurt, London, Paris and Dublin. I can’t stress enough what an experience like this was for me personally. I met up with friends along the way at different stops but I also made new friends and spent a lot of my time with my walkman, journal and camera. I had an old Nikon F3 with a 35 and 50 mm lens. Along with as many rolls of film I could reasonably carry. By accident (in some ways I believe fate) I double exposed a roll of him on my trip. Of course, I didn’t realize this until after I came home from my travels. But this random combination of people, places and things merging on cellulite was a great gift. Here are some of those pictures. What's even sweeter is that I got to go back to some of these places during my time at the White House as a staff photographer. 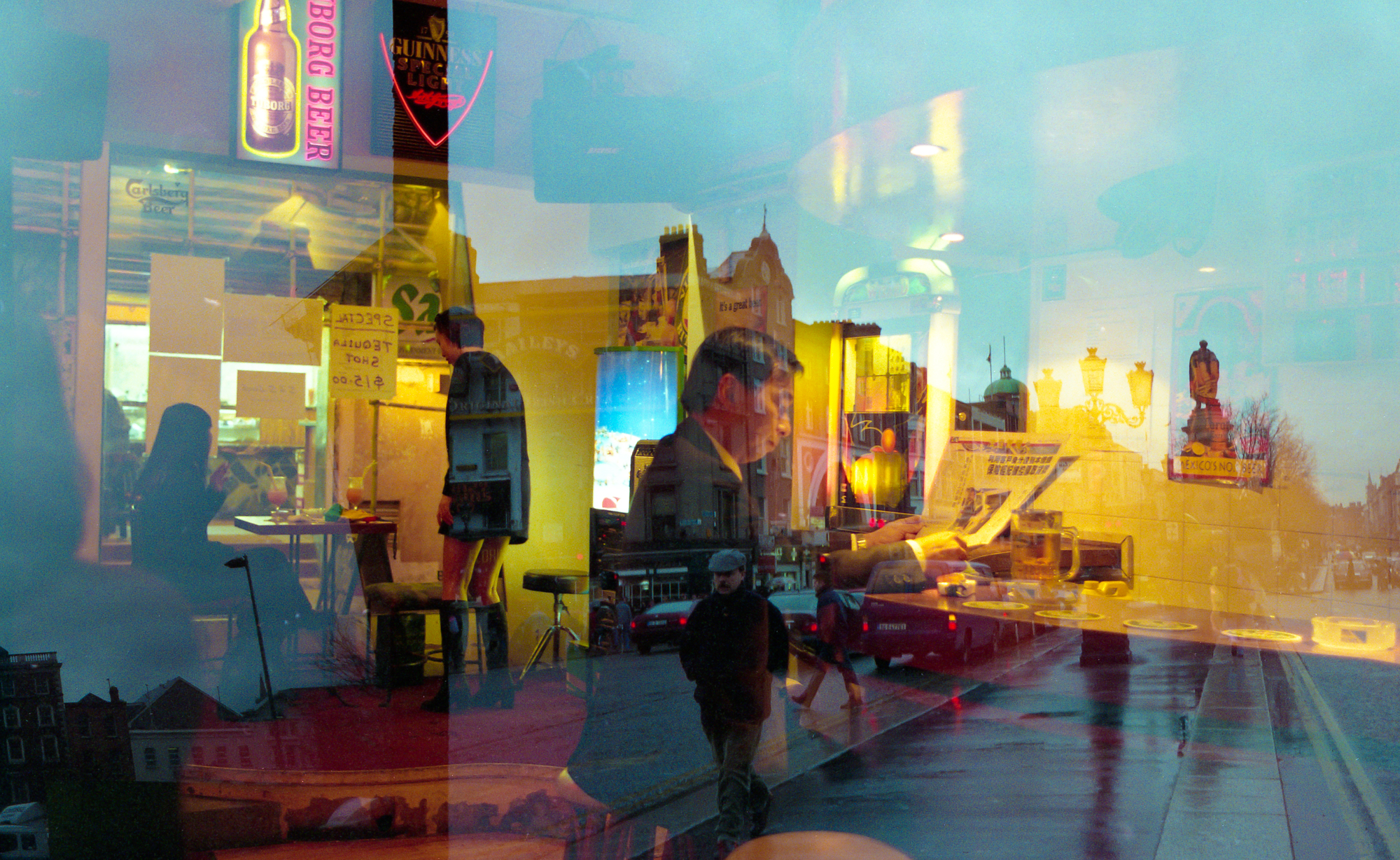 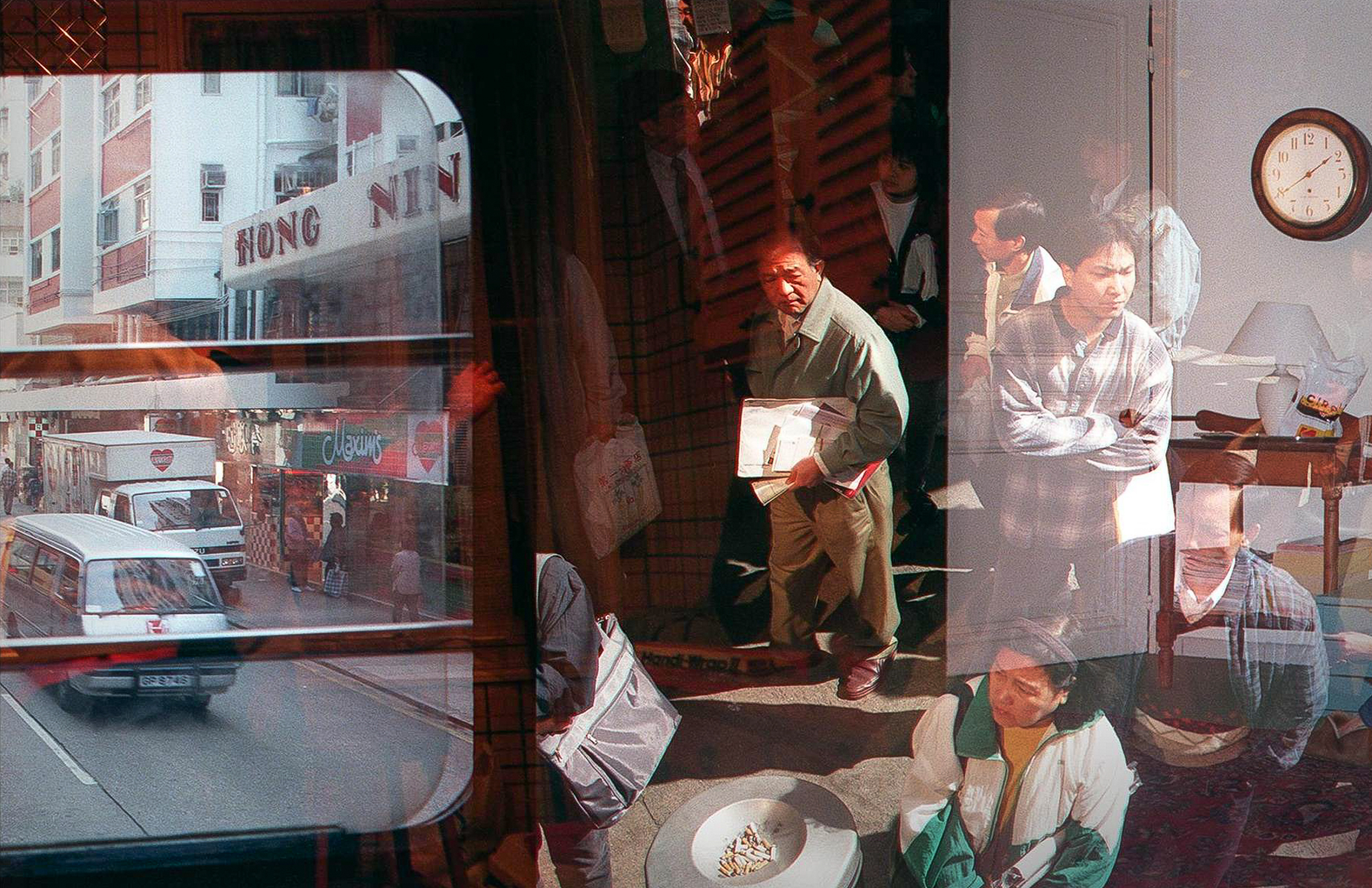 Published by Lawrence Jackson in Uncategorized